The push for Dessert WITH Dinner 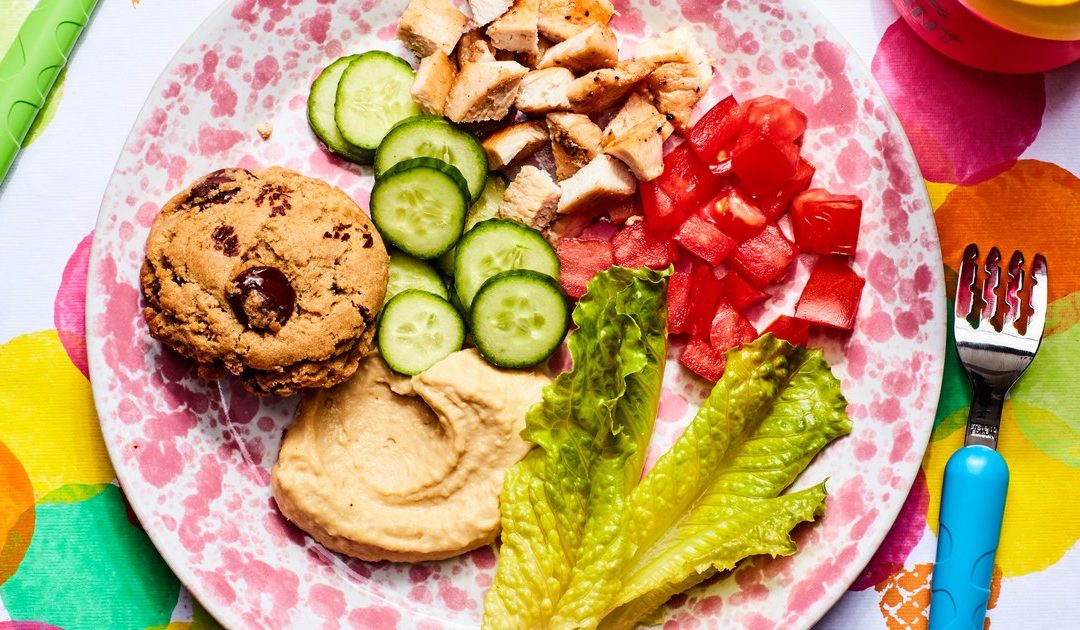 “Mooooooom, can we have dessert tonight, pleeeeease?”

“How many more bites do I have to take before I get dessert?”

Sound familiar? More often than not, parents are struggling with when to offer dessert, what to offer for dessert, and how often to offer it. Allow me to guide you along what I believe to be the easiest way to combat the “dessert struggle” so that mealtimes can be pleasant for all of you.

Before I get into the way to do it, we must quickly lay some groundwork that’s essential for the strategy to actually work. I hear from so many of you that dessert is either rarely offered inside the home or is being used regularly as a means of obtaining the behavior you want from your children. When we decide that a food is “unhealthy”, “bad”, or too high in sugar it causes us to want restrict that type of food from our household so it won’t be overconsumed. However, we all know that restriction is the bigger cause of eventual overconsumption. (need proof? Think back to any time in your life you decided to quit a food/beverage cold turkey because some external element told you you needed to. It starts to become a main focus in your mind and eventually you give in and go wild with whichever food/drink you were avoiding. Personally, I can remember craving sushi almost daily during my pregnancies simply because it wasn’t “allowed”).

Children who aren’t offered the opportunity to LEARN moderation at home become the ones who can’t stop indulging at birthday parties or social gatherings. In fact it becomes a vicious cycle where kids feel restricted, go to a party and get the chance to indulge, inevitably overconsume, and then parents think “see, this is why I don’t have cookies in my house, she can’t control herself”. In reality, for most children, the opposite would be true. If cookies, for example, were offered on a more regular basis and not restricted, they wouldn’t feel the need to over do it. The icing on the cake (pun intended) is for you to regularly consume dessert with your child to role model this goal of moderation. But that’s not the whole picture…

Not only do children need to have exposure to sweets more regularly to learn moderation, but they also need to learn that food is NOT contingent on behavior.  When dessert is used as a punishment in any way, whether it’s because they haven’t eaten a good enough meal or because they acted out behaviorally earlier that day,  they begin to learn that the dessert is a special treat which further increases desire and allure for that supposed “unhealthy food”. This in turn makes it harder for them to practice moderation as the dessert becomes higher on the hierarchy of foods.

Likewise, when we use dessert as a reward for positive behavior as is commonly done with potty training, getting good grades, or eating everything on their plate, children learn the habit of using food as a way to reward themselves later in life. I think most people can relate to this issue as adults when we feel we have earned that chocolate brownie after working hard, getting a promotion, or for being so “good” on our diet.  Somewhere in our subconscious we foolishly believe that food will make us feel better or should be part of celebrating our own achievements. So while there is nothing wrong with having delicious food as part of holiday or party celebrations, it shouldn’t be the routine way in which we congratulate ourselves.

Now that we have established the need for dessert as a learning opportunity for moderation AND eliminated using it as a way to punish or reward children, we can talk about HOW to incorporate it into your family’s lifestyle. Enter….dessert with dinner.

Remember the saying “life is short, eat dessert first”? Well there’s something to be said for that when feeding children. When they are given the opportunity to see all the options on the table including dessert, they can eat the right amount for their bodies. If instead they had eaten all their dinner until feeling full (which is the goal to eat until we feel full, not to please others), and were then offered the dessert, it would entice them to eat past their fullness. Over time, eating past fullness will lead to deregulation of their appetite, eventual weight gain, and possible decline in their health. Wasn’t this what we were trying to avoid to begin with? Wasn’t our goal as the parent to protect their health which is why we weren’t giving too many sweets to begin with? When they can EQUALLY view their chicken or sweet potatoes on the same level at the same time as their cookie, you might find that they end up eating LESS of the sweets.

Might sound too good to be true, and yes some kids will undoubtedly eat all of their sweets before the rest of the dinner when you initially try this strategy, but it doesn’t take long before they realize you aren’t going to bribe them to eat more of their dinner, won’t be taking away that cookie if they don’t eat more broccoli, and will be offering another dessert the next night or 2 days later. The desire lessens, all foods equalize, and before you know it you have clean plates with half eaten cookies.

If you have attended a workshop of mine in the past or been a private client and already implemented this rule in your household, please snag a photo of your child’s plate including dessert and post to social media to inspire fellow parents to give it a shot with the hashtag #dessertwithdinner .  Slowly but surely this can become the norm in households across the country!

Email me at [email protected] to set up a FREE 30 minute phone consultation to discuss how I can help your family!